Saved Searches Advanced Search
Items will remain checked out on your account for a 72-hour or more quarantine period once returned. Items will not accumulate overdue fees during this period.
Print 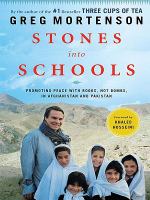 Promoting Peace With Books, Not Bombs, in Afghanistan and Pakistan

In this dramatic first-person narrative, Greg Mortenson picks up where "Three Cups of Tea" left off in 2003, recounting his relentless, ongoing efforts to establish schools for girls in Afghanistan; his extensive work in Azad Kashmir and Pakistan after a massive earthquake hit the region in 2005; and the unique ways he has built relationships with Islamic clerics, militia commanders, and tribal leaders even as he was dodging shootouts with feuding Afghan warlords and surviving an eight-day armed abduction by the Taliban.
Publisher: New York : Viking, 2009
ISBN: 9781101150672
110115067X
9781101151969
110115196X

Mortenson picks up where the best-selling Three Cups of Tea left off by recounting his ongoing work promoting peace by establishing schools for girls in Afghanistan and assisting with relief efforts in Azad Kashmir and Pakistan after the devastating earthquake in 2005. He forms unusual relationsh... Read More »

Recommend to read "Three Cups of Deceit" by Jon Krakauer before or after reading this. Fiction or fact.....that is the question.....thank you "sambert"(see comment below,) your comments were very helpful. I just don't know what to think anymore!

Mortenson picks up where the best-selling Three Cups of Tea left off by recounting his ongoing work promoting peace by establishing schools for girls in Afghanistan and assisting with relief efforts in Azad Kashmir and Pakistan after the devastating earthquake in 2005. He forms unusual relationships with militia personnel, tribal leaders, and Islamic clerics and shares the personal histories of the people involved in this two-decade humanitarian effort.

I gave stars as there are some good descriptions of people and that area, having lived and travelled there. Greg seems to have a great adventure spirit, and no doubt did some great things in an exceptional environment. Well done. He got a good part of proper development practice right (Listen and make sure you have the local’s wish behind you).

His descriptions (some hilarious maybe to those who haven’t lived in such conditions) are excellent, & I have no problem believing their veracity. I have had similar experiences, though maybe not quite to that extent. So again, thank you Greg, in letting the world know how life is like in some parts of the world.

But I took stars off, as the book give an odour of propaganda, and much semi disguised self-congratulation. That he may have borrowed some stories, or embroidered a bit, that’s fine, but on a few occasions it’s unbelievable, and makes zero sense.

This was, in my view, written (or heavily edited) for the US audience, and distortions are evident, to the extent that sometimes, it can discredit the whole. Sad in my view.

It was a bit surprising that school “buildings” seemed very much up-front, (as is the emphasis on girls) and sustainability, well … If you pay for everything, yes, it goes fast, but may not last that long. What is less clear is how these buildings stood up to time, including what teachers were still there and the amount of kids attending regularly. Apparently a lot of schools are deserted. True or not ?

Greg was not a NGO manager, and hence achieved lots more. Well done.

However, for example, he keeps referring to his board, and when you dig a bit deeper, the board is pretty thin (deception ?) and there are only 2 years reports published ( 2004 and 2010) on the CAI website, the 2nd does raise a few eyebrows in the finance section.

If there was a scandal etc in April 2011, the 2010 report was then published only in October 2011, and the report of Sept 2011 is not yet published 4 months later ? Sad that he did not surround himself with some wiser people in an area where was weak.

I quite understand that when you have to carry “bricks” of cash around, western accounting principle may seem somewhat weird (I have done the same in remote areas, so I know what he is talking about), but when revenue-donations of 20+ million $ are present, some precautions are needed.

The CAI website now states that Greg is no longer on the board and will be concentrating on relations, hopefully in Afghanistan & Pakistan. That is great. Maybe the euphoria of having many US presentations got to him, and reality started to have 2 faces?

I wish Greg well, and that he continues to have a fulfilling life.

This is the continuation of a remarkable and inspiring story of how one man's promise to build a school in the remote mountains of Pakistan snowballs into an educational odyssey that crosses borders and spans decades. Stones into schools picks up where three cups of tea left off and tells the story of Greg and his amazing colleagues as they build schools for girls throughout Afghanistan, in the heart of Taliban country. It took me a minute to get used to the change in style as the last book wasn't written by Greg but I ended up enjoying that this one was written in the first person. I loved this book and was truly touched by the tenacity, perseverance and dedication of people in a war torn nation to educate their children and especially their young women. It's amazing what can be accomplished when we follow our hearts and work together. Definitely worth the read.

Over the last 16 yrs, the Central Asia Institute (CAI) has worked to promote peace through education by establishing more than 130 schools, most of them for girls in remote regions of Pakistan and Afghanistan.

Mortenson's mission to build schools, mostly for girls, from Pakistan to Afghanistan. Good luck with that.

I agree with the last post. The enthusiasm of a young Greg Mortenson is missing here ... he is still passionate about his cause, (and it is an excellent one!) but now it's like a businessman is passionate about his company. I looked forward to reading this after loving "Three Cups of Tea" so very much, but gave this one up a third of the way through ...

Not as good as the first. A bit boring and predicatable.

There are no age suitabilities for this title yet.

There are no summaries for this title yet.

There are no notices for this title yet.

There are no quotes for this title yet.